They may not be as cute and cuddly as their bottlenose cousins but rough-toothed dolphins (Steno bredanensis) make up for it in a big way. Nicknamed "the creative dolphin", these pint sized cetaceans are known for their playfulness and personality. They are highly social animals that are often seen swimming in tightly formed groups, almost on top of one another at times. They also show a great deal of interest in humans and anything else that catches their attention. Rough-tooth's commonly skim along the surface of the water to visually examine people and interesting new things that may be nearby.

Despite these intriguing qualities, we know very little about this curious species. Rough-toothed dolphins can be found in tropical and temperate waters throughout most of the world. They primarily inhabit deeper waters which may be why most people are not aware of this fascinating species. In fact, very little is known about this species and few studies have been conducted.Occasionally, rough-toothed dolphins are found stranded and are rehabilitated at facilities like Gulf World. Dolphins that are too young or otherwise impaired are unable to be released because they would likely not survive in the wild. These non-releasable dolphins must be kept in human care, preferably with members of their own species or another compatible species. This was the case for each of the rough-toothed dolphins at Gulf World who now have the chance to lead a life filled with companionship, excellent medical care, social and cognitive enrichment, and the adoration of loving staff and fans.

All things remarkable are surprisingly simple; albeit difficult to find.” ― Criss Jami

What is it like to meet a Rough-toothed Dolphin?

They all have a unique story, distinctive personalities, and even some physical limitations that make each animal's story of survival truly inspirational. Once you get to know them, see if you can identify them by name throughout our website! Can you tell them apart? 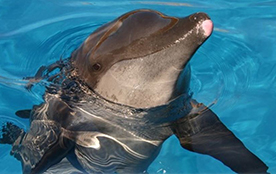 Doris was stranded off the coast of Cape San Blas, FL after Hurricane Ivan in 2004. She can easily be identified by a freeze brand in the shape of the number seven on her dorsal fin and the small hole in her tail fluke. Doris really enjoys her tail rubs! 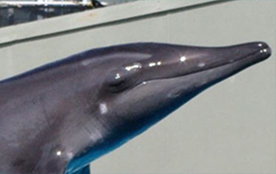 Largo was stranded off of Key Largo, FL in 2004. She was rescued and rehabilitated then deemed non-releasable due to her young age. She enjoys eating and playing with ice cubes and sticking her tongue out! 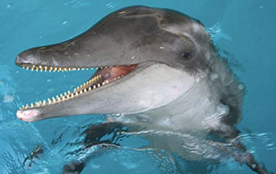 Kitana was stranded in Cape San Blas, FL in August 2009 and was deemed non-releasable due to significant hearing loss. She enjoys toys that she can carry around on her flippers, like wearing a purse. She can be identified by her small dorsal fin with a jagged trailing edge. 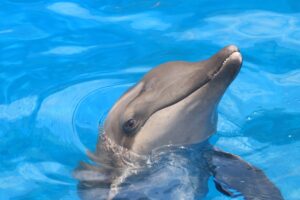 Dagney was stranded after Hurrican Michael on the Mississippi coast and rehabilitated at the Institute for Marine Mammal Studies before being moved to her forever home at Gulf World.  She was deemed non-releasable because of significant hearing loss. She can be identified by her smaller size and snaggle-tooth. She likes playing with frisbees and will carry them on her flippers or push and fling them with her rostrum!

Astro was stranded in 2005 in Corpus Christi, TX and was named after the Houston Astros. He was deemed non-releasable due to significant hearing loss and identifiable by the scoliosis in his peduncle and his large, rounded face. Did you know that some dolphins enjoyed wearing traffic cones on their rostrum? That's Astro for ya! 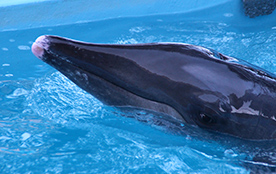 Ivan was stranded in Cape San Blas, FL in September 2004 following hurricane Ivan. He was deemed non-releasable because he was very young and still dependent on his mother. Some dolphins are darker in coloration than others, as you can see in this photo of Ivan. Some are noisier than others as well! Ivan's whistle is particularly unique. 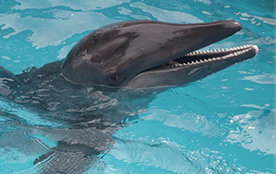 Stan was one of the smallest and youngest rough-toothed dolphins that we worked with. He was stranded in central Florida and rehabilitated by Sea World in Orlando. This storm also may have taken out a small notch from his dorsal fin and this is one of the features we used to identify him. Stan was deemed non-releasable due to significant hearing loss. 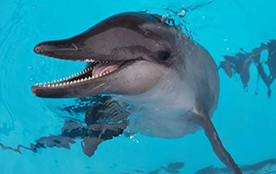